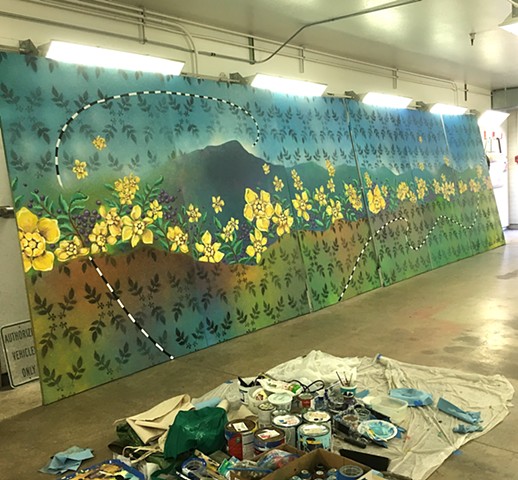 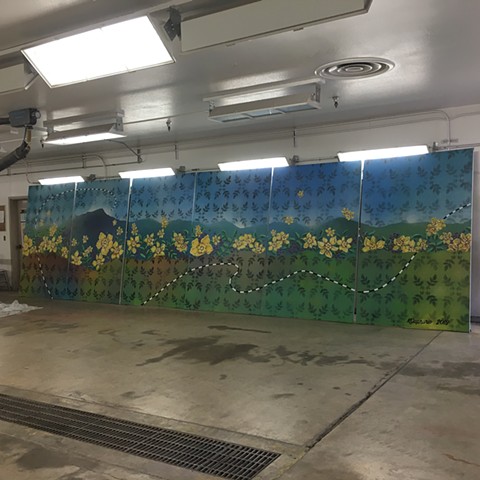 Be careful what you wish for...for years I'd wanted to do a mural, a large public work. Now I have and it's been an incredible amount of work and learning—it's pushed me physically in ways I could not have imagined, having been a small to mid size studio artist for most of my career.

Mahonia Dreaming is many things. It's a public/private project between Urban Canvas and the Mahonia Bldg, Eugene. It's an eight foot by thirty foot painted panel and a response to the values expressed throughout the Mahonia Building and its industrial-environmentalist design. And, it's an homage` to the Willamette Valley and the natural resources that have sustained communities, beginning with the Kalapuya people, for generations.

Mahonia Dreaming graphically layers time and space through the identification of pattern and visual movement. A unifying, repeated motif abstracted from the Mahonia Aquifolium plant, known commonly as Oregon Grape, is overlaid across the top and lower portions of the panel. Eugene’s signature ridgeline of Spencer’s Butte is abstracted and represented twice—first as a far distant contour of the Butte and adjacent rolling hills and, second, as a mirror image that contains and from which dense clusters of Oregon Grape, both in its flowered and berry stages, emerge and signal growth. The flight path of a hawk, a sight frequently observed in the Willamette Valley, is dynamically represented by black and white tracking lines as it swoops across the panel, its curved path directing the viewer through the work.

Every visual choice from color palette, motifs and patterning to paint handling and technique are designed as an authentic response to the core values of its subject, the Mahonia Building and its context, Eugene.